This feature appeared in issue seven of Journeys magazine.

I’m enjoying an early evening beer in the warmth of the Duck & Donkey Tavern at Semonkong Lodge. Thunder is crashing across the heavens outside, lightning ripping apart the night sky, rain hammering down relentlessly.

A guy staggers in, wearing a glazed expression. He’s American, touring southern Africa for three months on a motorbike. He came off once today in the sea of mud that used to be a road and he’s had several near misses with skidding 4x4s. “It took me a whole hour to defrost my feet when I arrived,” he rasps. I ask if, like me, he’s visiting Semonkong for walking and pony trekking. “No, I gotta move on tomorrow,” he says, a faraway look in his eye. “I’m here for the Sani Pass.”

The tiny mountain kingdom of Lesotho, surrounded entirely by South Africa, attracts this kind of thrill-seeker. The Sani Pass is one of Africa’s most legendary roads, a series of treacherous switchbacks snaking over the Drakensberg mountains that straddle the South Africa-Lesotho border. In the world of motorcycling, it’s the Big Daddy of extreme off-road racing, impassable in winter, when Lesotho is blanketed with snow, and claiming vehicles and lives when it rains.

Driving from Maseru, the capital, had been tough enough for me, battling for hours through one bone-shaking thunderstorm after another, enveloped by dense cloud at altitude, wallowing along a quagmire of a road that’s still only partly built. The arduous journey, though, is a small price to pay for the extraordinary beauty of this tiny country, located entirely between 1,000 and 3,000 metres above sea level.

A few days before, we’d crossed the northern border at Caledonspoort, just beyond the chichi South African town of Clarens, all teashops and art galleries in the centre, a sprawling, depressing township tarnishing the outskirts. But once on the other side of Lesotho’s bustling frontier town of Butha Buthe, I felt as though I’d stepped into a parallel world; a time warp in which there were no mechanised vehicles, no satellite dishes, no teashops. More to the point, no townships.

The road to Tsehlanyane National Park climbed through steeply terraced valleys, high above rivers carving channels through the red earth. Weeping willows draped over the rushing water, knee-deep in meadows of pink, white and magenta cosmos flowers. Mud brick rondavels with thatched roofs clung to the hillsides. Ladies in their Sunday best were walking to church, gossiping. 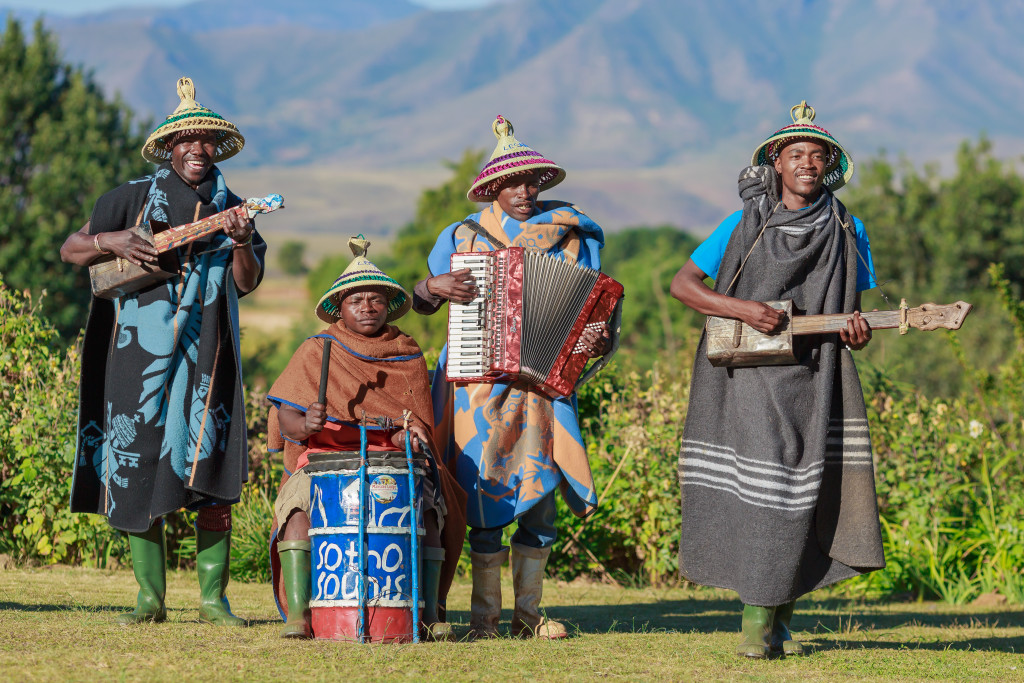 Most strikingly, there were horses everywhere, grazing on the hillsides or mounted by young boys ushering herds of sheep and haughty-looking Angora goats along the dirt road. Lesotho is famed for its sure-footed mountain pony and the Basotho (as its people are known) are fast and fearless riders, clad in their standard garb of a colourful wool blanket, a conical hat and in winter, a balaclava. Everybody rides; the horse is the main and usually, the only form of transport.

Lesotho only has a smattering of tourist lodges (not forgetting one ski resort), mostly dedicated to pony trekking, fishing and walking. Our first night was spent at Maliba Lodge in the Tsehlanyane National Park. We feasted on velvety pumpkin soup, mountain trout and molten chocolate fondant for supper and slept in a rondavel with a giant-sized bath and a fireplace; more honeymoon than the hardship I’d expected in a place where tourism is still at the cutting edge. I rose at dawn and stood on the wooden deck, clutching a mug of steaming tea and
watching the rising sun striking the tops of the hazy mountains. It was a scene of incredible beauty and peace.

The raison d’être of Semonkong, our second stop, high in the mountains in the very heart of Lesotho, is the Maletsunyane Falls, one of the highest waterfalls in southern Africa. A Guinness World Record certificate for the world’s longest single drop abseil, on which you drop down the height of the falls, tied to a rope and drenched in spray, is proudly displayed in the bar where I’m drinking. There’s a royal
connection, too; Princes William and Harry came to Semonkong in 2010, visiting projects connected with Sentebale, the charity for vulnerable children that Harry co founded with Lesotho’s Prince Seeiso. They, too, partied in the Duck & Donkey. 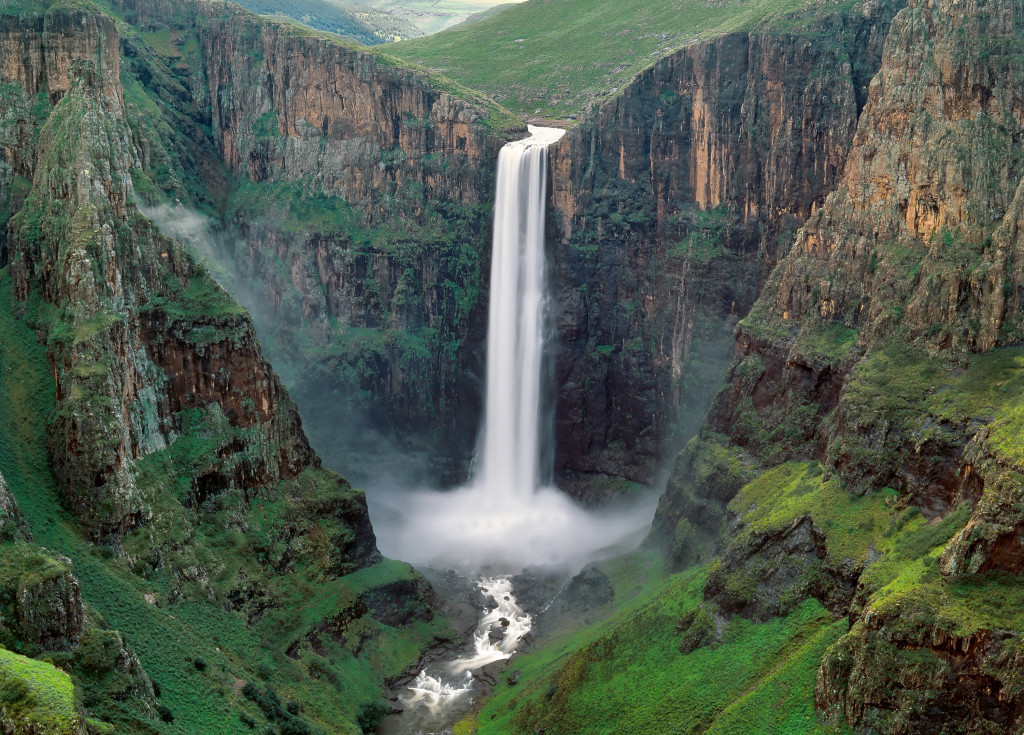 The following morning, the rain has stopped and the American biker has packed up and left. We ride with a guide to the waterfall and yet again, I am blown away by the ravishing beauty of this strange and exotic place. The clouds have cleared to reveal high peaks encircling the lodge. We follow the contours of the hillside, past rippling patches of maize and barley. The horses’ hooves squelch in the mud. One huge, sweeping vista after another unfolds, the constant stream of blanket-clad Basotho and their animals creating splashes of brilliant colour against the lush, green fields. Some are accompanied by donkeys, weighed down by sacks of grain, headed for Semonkong village to shop and trade. Cowbells clank and people call out greetings to one another. In such a remote place, where an individual may ride the mountain trails alone for days to reach a village, extending greetings to all and sundry is an essential ritual.

In the distance, a deep, red chasm opens out in the rocks, great spikes and towers of basalt and sandstone rearing up from hundreds of feet below. We tie the horses up in a copse of pine trees and pick our way along a narrow trail to a view that takes my breath away. The Maletsunyane Falls cascade in a long, graceful silver ribbon over a vast cliff, the water thundering as it hits the rock and spray creating a cloud
of white mist. There isn’t a soul in sight.

This magnificent isolation could change as World Bank money is paying for the road across the centre of Lesotho to be tarred, which will bring a new kind of tourist once the need for a 4×4 and a pioneering spirit has gone. The opportunity will create much-needed jobs for locals, which is, of course, a good thing, but I, for one, feel privileged to have stepped briefly into a world still so utterly beautiful and unspoiled.