At the base of the cliff, the sea is a brilliant, incandescent turquoise, smooth, white rocks gleaming just beneath the surface. We are strolling along the cliff path towards a distant beach, the sand an amazing shade of pinky-yellow. As we get closer, we can see that there’s nobody there apart from a few wading birds. When the breeze drops, the sun feels blisteringly hot. We could be in the Caribbean if it weren’t for the bleating of sheep. We are, in fact, at Scotland’s Loch Torridan, looking across to the islands of the Inner Hebrides. 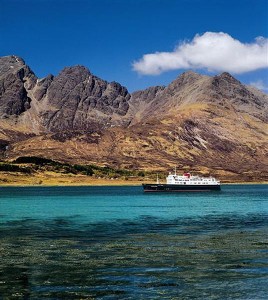 Caribbean they may not be but the islands of the Hebrides are scattered over a large area off the coast of western Scotland and as such are less than easy to string together for a mere week’s walking holiday. Fortunately, just as in the Caribbean, there is a cruise ship that will do all the work for you, in this case, the Hebridean Princess.

Hebridean Island Cruises’ ‘Footloose’ walking cruises on this petite, 49-passenger ship are a stroke of genius. What could be more blissful than a very small, very luxurious floating home which takes you to wild, beautiful locations every day fo a week’s worth of hiking through dramatic landscapes, over volcanic outcrops and along clifftop trails?

The cruise begins in Oban, where I have joined with some trepidation. While the brochure describes the my voyage as ‘walking or strolling at your own pace’, I’m worried that my assorted sporting injuries wouldn’t stand up to seven days of hard hiking. I am not alone; as we cast off our lines and sail out of the harbour and into the sunset, dinner conversation seems to be a general swapping of war wound stories, as everybody sizes each other up. Fellow passengers are clearly fairly wealthy (these cruises don’t come cheap); there’s a fair smattering of titles on the guest list. But the wine flows and later, the single malts. Ted, one of the three resident guides on the ship, plays the guitar and rattles off jokes and I can already see some of the ladies getting misty-eyed and mentally signing up for his walking group.

Needless to say, Day One turns out to be a baptism of fire. We awake, having sailed through the Sound of Mull, anchored off the tiny islet of Eigg, inviting in the unexpectedly brilliant sunshine. But Eigg is dominated by a sheer-sided, black volcanic plug called An Sgurr. It towers menacingly over the rolling fields and moorland. We are to go up it – not round it, but right to the top. Did I mention that I don’t like heights?

The walk starts out innocuously enough, through beautiful shady woodland, the ground in late May still a sea of bluebells and the scent of wild garlic hanging in the air. We tramp across boggy moorland, looking for wild orchids as the call of a cuckoo echoes across the heather. The push to the summit is up a steep, rocky slope, on top of which there’s a sheer drop on one side and breathtaking, 360-degree views as far as the Outer Isles. Hebridean Princess sits far below us, a black and white speck in a glassy, flat sea. On the way down, a heat haze shimmers off the heather. I fantasise about moving to the Hebrides until someone tells me it’s like this for about one week of the year.

Sunday finds us on Skye, stepping ashore at the tiny town of Portree. Everybody knows each other by now. The tough ‘walkers’, have opted for the hardest climbs and have been assigned Pat as their guide. Pat is a man of few words and an archly raised eyebrow but displays an encyclopaedic knowledge of birds, flowers and geology. I soon learn not to ask him daft questions such as ‘How scary is the steep bit at the top?’ for fear of being kicked out into the slow-moving ‘strollers’ group, escorted by kindly Kate to see local attractions like Inverewe Gardens, Flora MacDonald’s grave and Skye’s Talisker distillery.

Today’s challenge is the Quiraing trail, a tilted wall of ancient lava that forms part of a long fault line. Like An Sgurr, it’s a huge slab of rock, this time reached through a hidden valley littered with giant boulders, each one brilliant with patches of yellow lichen. We squelch through bright green moss (proper walking boots are essential for this trip) until the path becomes steep and narrow, with a big drop-off on one side. Once again, we’re rewarded with dazzling views, this time as far as Cape Wrath in Scotland’s far north, a hazy headland shimmering in the hot afternoon sun.

Life on board settles quickly into a comfortable routine, mainly consisting of eating everything in sight, as all the fresh air and activity makes us hungry. We get back to the ship in the afternoons, glowing and muddy, kick our boots off and flop in the cosy lounge with tea and chocolate cake before wallowing in long, hot baths.

Dinner is a communal affair in the ship’s dining room, all fresh, local ingredients; lamb, beef, fish and Scottish cheeses and whisky-laced puddings. One night, a haggis is produced, addressed with great panache by Ted, sporting full kilted regalia. After supper, everybody retires to the lounge for further appreciation of single malts and the occasional talk by the guides on Scotland. I miss most of it, though, as I fall into the deepest sleep imaginable as Hebridean Princess hauls anchor and potters slowly to the next island.

The furthest north we reach is Harris in Outer Hebrides, quite a contrast to the lushness of Eigg and Loch Torridan, bleak and bare. This is our only grey day and the gloomy town of Tarbert is hunkered down, with nobody on the streets. We warm ourselves with swigs of the ‘wee drams’ – miniature bottles of whisky – that sit in a ‘help yourself’ basket at the ship’s reception desk. Today’s trail, the Postman’s Route, turns out to be a long march up a scrubby hill and down an incredibly steep, zig-zagging path to a narrow inlet where the royal yacht Britannia apparently used to drop in for a ‘wee barbecue’ on the beach, observed only by seals. (In fact, the Queen has chartered Hebridean Princess twice since her beloved yacht was decommissioned, revisiting old haunts in the islands.) The path is called the Postman’s Route because it used to lead to two hillside villages, now just sad, empty shells. The silence of the ruins and the overgrown, crumbling walls are a chilling reminder of the brutal land clearance of the islands in the 19th century.

Tonight, the sky clears and there’s a special treat. We’re invited to assemble on deck after dinner, just as the sun is setting. Nobody knows why. But as the champagne corks pop and the sun begins to sink towards the horizon in a blaze of burnt orange, Mendelssohn’s Hebridean Overture begins to echo out across the deck. We are sailing right past Fingal’s Cave, a sea cave on the end of Staffa, formed from perfectly symmetrical hexagonal rock columns. Mendelssohn visited from Oban in 1829 and despite his seasickness, was inspired by the geometric shapes and the shafts of sunlight penetrating the turquoise water at the mouth of the cave and immediately scribbled down the beginning of the score. It’s an unforgettable moment; just our little boat, the fading light and the haunting music echoing across the deck. Everybody falls silent.

Our final walk on the penultimate day is on the lushly wooded island of Ulva. We’re lacing up our boots when a fellow walker says to me: “Look at you. You’re a different person from a week ago.” I reaslise she’s right. I arrived stressed and tired and in just six days, I feel tanned and fit. We set off, stepping around piles of lobster pots cluttered on the jetty, along country lanes framed with purple and scarlet wildlflowers, passing a solitary phone box that’s doubling up as a greenhouse for growing tomatoes in a Gro-Bag. We see buzzards, fat, basking seals and views of the much browner, bleaker hulk of Mull across the water. I don’t want to leave. So many things have surprised me about the Hebrides. The dazzling sunshine. The contrasts between the islands – some bleak and rocky, others carpeted with flowers. And the sheer ease of this trip; essentially, I haven’t had to make a decision all week other than whether breakfast is too early have whisky with my porridge. You can keep the Caribbean. I’ll take Scotland any day.